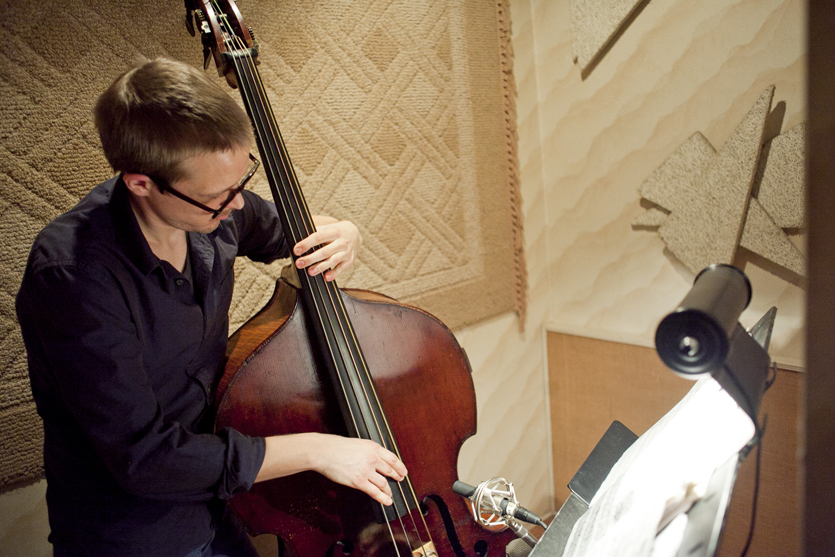 Eivind Opsvik (born in 1973) is an upright bass player and composer born in Oslo, Norway, and is the son of innovative industrial designer Peter Opsvik, who is also a jazz musician. Eivind’s father performed with bands such as Christiana Jazz Band and the Christiana 12. Eivind himself inherited his father’s infatuation with music and pursued it academically, graduating from the Norwegian Academy of Music in 1997. In Oslo, Eivind’s public jazz performances gradually gained recognition, and he ultimately decided to expand his reach beyond Oslo by moving to New York in 1998, where he still lives and plays music. Aside from the upright bass, Opsvik is also proficient on the lap steel guitar, keyboard, and percussion, and is also an avid producer and mixer.

Opsvik formed his band Overseas in 2002, which is a quintet comprised of Jacob Sacks on piano, harpsichord, and organ, Tony Malloby on saxophone, Kenny Wollesen on drums, and Brandon Seabrook on guitar (a recent addition to the group). Opsvik remains the central creative force of the band, playing upright bass and composing all of the music. Overseas has released four albums since its inception: Overseas (2003), Overseas II (2005), Overseas III (2008), and Overseas IV, which was recorded in the summer of 2011 and released in 2012. Apart from his band, Opsvik is also involved in an experimental pop venture with Aaron Jennings called Opsvik & Jennings, a solo project of his own, and countless endeavors with other bands and musicians as an upright bass player. Opsvik has been a sideman for Matt Maneri Paul Motian, Jeff Davis Trio, Mary Halvornson’s Reverse Blue, David Binney, Rock Engine, and many others. Aside from his wide-ranging work as a performer, Opsvik also runs his own record label called Loyal Label, where he produces, records, and mixes bands out of his basement.