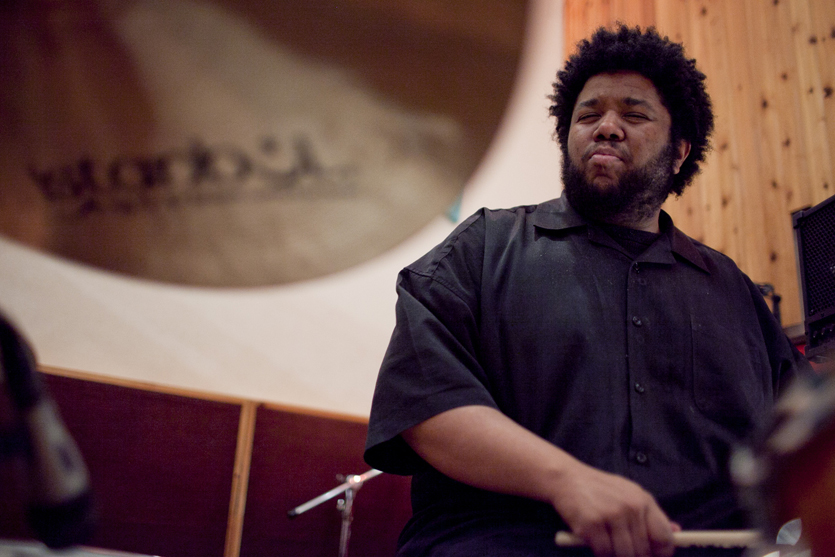 Tyshawn Sorey (born 1980) is a critically acclaimed multi-instrumentalist from Newark, New Jersey. Preferring to express himself through several sonic mediums, Sorey is a skilled percussionist, trombonist, pianist, and composer. Sorey’s work has been widely covered in publications such as The Village Voice, National Public Radio, Jazz Times, and The New York Times, all of which have expressed approval and respect for his music.

Sorey attended William Paterson University and graduated with a B.M. in Jazz Studies in 2004. During his time there, he had the opportunity to study with instructors such as John Riley and Anton Vishio, and was also part of the New Jersey Percussion Ensemble, under Peter Jarvis. Sorey then moved on to earn his M.A. in Composition from Wesleyan University in Middletown, Connecticut. Soon after, Sorey became a Faculty Fellow at Columbia University, and remains an avid leader and participant in lectures, master classes, and panel discussions.. In 2011, Sorey began to pursue his doctorate in Composition at Columbia.

Sorey has used his abilities on multiple instruments to perform and record with a wide array of jazz acts, and has played either drums, percussion, piano, or trombone with artists such as John Zorn, Steve Coleman, Vijay Iyer, Muhal Richard Abrams, Dave Douglas, Wadada Leo Smith, and countless more.Sorey was also elected by John Zorn to curate a month of performances at a New York-based experimental performance venue called The Stone. Apart from his work as a sideman and curator, Sorey also extensively tours with his own ensemble, and has released three albums as a composer and bandleader: That/Not (2008), Koan (2009), and Oblique (2011). In total, Sorey has recorded over 160 unique compositions that transcend beyond jazz and into multiple genres. Sorey’s work is held in such high regard that his compositions have been commissioned by the Van Lier Fellowship, Roulette, and the International Contemporary Ensemble.